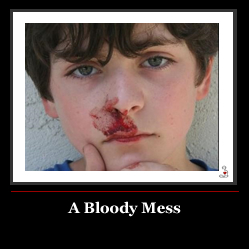 Our youngest gets up this morning with a bleeding nose. This has been an ongoing occurrence for the past three months; nothing of any major consequence, just a little messy. The fallout from this has been 4-5 ruined light colored towels, some bed sheets and pillow cases. Not to mention blood splattered walls, floors, sink and light switches. Why? An 8-year old has no common sense.

Yesterday his mom decides to give him his own rag (an old shirt) that he can use if his nose is bleeding rather than make a mess everywhere.

This morning I hear the two of them in the bathroom. He is in there with his head over the sink and letting the blood drip (and splash) everywhere. No compression, no cloth…just total lack of common sense.

Flash forward ten minutes and he is running down the stairs and heading to the living room. The living room is typically off limits to the kids. There is new furniture, a new rug, a nice tv and a nice stereo. From the day we moved in I banned the kids from that room. Why? Kids under the age of 30 lack common sense. The one day I broke down and let the older kids watch a movie on the “big screen” they promptly cranked up the stereo and blew my speakers that I so lovingly cared for for the last 20 years!

So the little one is heading to the living room, apre-nose bleed and with no cloth just in case. I ask him where he is going, he says the living room and I say not a chance. There is a another TV in the kitchen with easy to clean porcelain tiles on the floor.

I go back upstairs and his mom has overheard my rejection of his attempts to enter the living room. She is not happy! How could I be so mean? The poor boy has just had a nose bleed and needs to lie down, whereas I have sent him to the kitchen where he has no choice but to sit up. Conversely he could go back to his room, lie down and watch TV in there.

If I were to let him in the living room and his nose continued to bleed, based on what I have seen in the past, there would be blood on the carpet, the furniture and most likely the walls. Accidents happen BUT these kids have an uncanny way of leaving anything that stains long enough that the incident will never be forgotten.

If a child had the common sense to keep a cloth at hand “just in case” and actually use it immediately rather than waiting to see at least a couple of drops hit the floor “for full effect” AND cleaned up any mess as it occurred, I MIGHT be more accepting. However, experience has shown me that my choices are to be very strict or suffer though the child years with functional furniture rather than anything that I might find appealing.

So his mom isn’t talking to me this morning because I was “mean” to the little one. Too bad! If it were for her she would have no problems with a few blood stains on the furniture…as long as her babies were comfortable. I don’t care if she doesn’t talk to me…and I will do the same thing the next time this situation occurs. I for one want a nice clean couch…as I will probably be spending a lot of time sleeping on it soon!

1 comments on “The nosebleed”