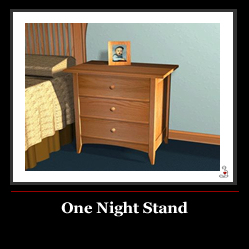 1. I see a lot of women stating that they aren’t looking for one night stands. This is so obvious I don’t really see the need in stating it. Everybody knows that night stands come in pairs (one for each side of the bed). If anyone is interested in two night stands…give me a shout!

2. Still more women seem to be seeking butterflies. This request can be overly confusing to the mind of a mere man. Many of us are still grappling with the idea of finding the elusive G-spot and don’t have time to be chasing butterflies.

3. What is this “real” man so many of you are seeking?. Has it anything to do with Quiche?

4. A few extra pounds…is exactly what it says…”few” as in a couple, two, a tiddly bit. I think many confuse the word pounds with rolls, similar to confusing the words “love” and “money”.
“Average” is another misnomer. I have seen some “average” weight women that are…well…above average (and that is the only time they will hear that being said of them).
BTW Did you know though that the average weight for a North American woman (20-74) is 164.3 pounds?

5. Why when a man doesn’t truly appreciate some women’s physical profiles they accuse him of seeking a “Barbie Doll”. Just because I don’t want to date a woman who weighs twice as much as I do doesn’t mean I want to date a blonde with plastic boobs.

6. Almost every woman feels the need to make some mention of their dislike of “players”. Oddly enough many of the women seeking “one” friend already have one! Could it be what they really mean is that they want to be the one’s doing the playing? Much easier to win the game if there is no competition.

7. My favorite is married women that state that they want to be wined, dined, romanced and to be the only one. As well they want commitment, time, respect, honesty, passion and excitement…oh yes…and no sex. This is not to be about sex! Then they wonder why they can’t find a guy on here that wants to talk with them.

8. I find that women are so preoccupied with men’s preoccupation with sex that they often make unrealistic assumptions about the man’s motives. When they find out that their assumptions were wrong, they will chastise the man for not being “flirty” enough. “I don’t want this to be about sex but if the guy doesn’t make it about sex…he must not be interested…and therefore neither am I!”
Huh?

9. Why are the guys so forward, rude, sexual in their introductions? Umm, because they are men? Really though (talking married here) there is typically one thing that comes to mind that they are missing at home. Not communication, not listening, not spending money on dinners, movies and gifts…sex. For sex he has two choices, $80 for a hooker or $200+ taking a married woman on a date just to find that she is a 3 dates before sex type of gal. Better he be straight forward up front.

10. Must have a pic…from the woman with no pic. Why does she not have a pic up? Because she is married and unless in one of those fantastic open marriage type arrangements, posting her pic would be stupid. The married man who posts his pic…also stupid. My favorite though are the ones that want a pic but state they will not send one of their own. Huh? What is a guy to say to that? Oh yes…”Hey wanna f***?”