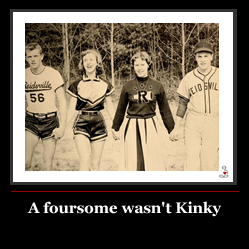 Scenario 1:
Jack goes quail hunting before school and then pulls into the school parking lot with his shotgun in his truck’s gun rack.
1957 – Vice Principal comes over, looks at Jack’s shotgun, goes to his car and gets his shotgun to show Jack.
2012 – School goes into lock down, FBI called, Jack hauled off to jail and never sees his truck or gun again. Counselors called in for traumatized students and teachers.

Scenario 2:
Johnny and Mark get into a fist fight after school.
1957 – Crowd gathers. Mark wins. Johnny and Mark shake hands and end up buddies.
2012 – Police called and SWAT team arrives — they arrest both Johnny and Mark. They are both charged with assault and both expelled even though Johnny started it .

Scenario 3:
Jeffrey will not be still in class, he disrupts other students.
1957 – Jeffrey sent to the Principal’s office and given a good paddling by the Principal. He then returns to class, sits still and does not disrupt class again.
2012 – Jeffrey is given huge doses of Ritalin. He becomes a zombie. He is then tested for ADD. The family gets extra money (SSI) from the government because Jeffrey has a disability.

Scenario 4:
Billy breaks a window in his neighbor’s car and his Dad gives him a whipping with his belt.
1957 – Billy is more careful next time, grows up normal, goes to college and becomes a successful businessman.
2012 – Billy’s dad is arrested for child abuse, Billy is removed to foster care and joins a gang. The state psychologist is told by Billy’s sister that she remembers being abused herself and their dad goes to prison. Billy’s mom has an affair with the psychologist.

Scenario 5:
Mark gets a headache and takes some aspirin to school.
1957 – Mark shares his aspirin with the Principal out on the smoking dock .
2012 – The police are called and Mark is expelled from school for drug violations. His car is then searched for drugs and weapons.

Scenario 6:
Johnny takes apart leftover firecrackers from the Fourth of July, puts them in a model airplane paint bottle and blows up a red ant bed.
1957 – Ants die.
2012 – ATF, Homeland Security and the FBI are all called. Johnny is charged with domestic terrorism. The FBI investigates his parents – and all siblings are removed from their home and all computers are confiscated. Johnny’s dad is placed on a terror watch list and is never allowed to fly again.

Scenario 7:
Johnny falls while running during recess and scrapes his knee. He is found crying by his teacher, Mary. Mary hugs him to comfort him.
1957 – In a short time, Johnny feels better and goes on playing.
2012 – Mary is accused of being a sexual predator and loses her job. She faces 3 years in State Prison. Johnny undergoes 5 years of therapy.