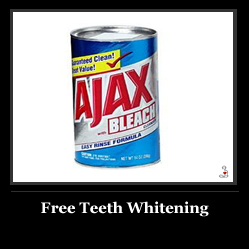 Mommy…how did your teeth get so white?

I have made it a habit of asking any woman I could as to why or why not when it comes to oral sex.  Most of them told me the taste was unappealing.  I went one step further and asked guys what they thought of the taste of a female during oral sex.  So here you go.  Please keep in mind that my survey has never got me closer to my fantastic goal but does make for interesting reading.

•”Ajax cleaner”
•”maybe salty”
•”smells like Ajax, I no longer buy Ajax because of it. Instead I buy Mr. Clean, it’s perfumed.”
•”thick Clorox”
•”rancid Elmer’s glue”
•”tastes and smells like Brie cheese”
•”It tastes like itself (it’s kind of like asking what pepper tastes like).”
•”Indescribable.”
•”It tasted like a thick, globby beer.”
•”I’ve discovered that although there is a general almond taste to all men — different men taste a little differently AND depending on how much a man drinks, smokes, and what he’s eating — the semen ranges in bitterness. The less healthy he is the worst his semen tastes. Almost like Clorox at times.”
•”It tasted quite salty.”
•”I cannot compare the taste to anything else I have tasted because its flavor is unique. I can compare its taste to the smell of Clorox bleach.
•Semen tastes like bleach smells!”
•”It has different tastes for different people ranging from rotten eggs and dirty socks to a slimy/salty taste.”
•”Semen had a taste of its own…Sometimes it’s more spicy  than other times; sometimes it’s sweeter. Sometimes it gives me the sensation that I just chewed on a balloon.”
•”Salty. It’s a lot like swallowing snot.”
•”Kind of like salty soft snot.”
•”Blah! BITTER taste!”
•”Salty glue, especially if dehydrated. Not-so-salty otherwise, actually more watery. Like paper-mache…flour, glue and old newspapers.”
•”Smells like Bradford Pear blossoms.”
•”I don’t know, but I’ve heard that semen tastes like whatever the ejaculator ate twelve hours before.”
•”Like you’d think dish washing detergent would taste, but doesn’t. Kind of soapy.”
•”Salty with a hint of chlorine.”
•”Tastes like the ink of an octopus.”
•”It tastes like almonds.”
•”The taste was not easy to identify, it was sort of mixed with another fluid.”
•”Sort of a non-descript taste leaning towards the salty side of the spectrum.”
•”Not much of a flavor. Kind of salty.”
•”What does saliva taste like?”
•”Alfalfa sprouts.”
•”Caviar.”
•”It has a surprising non-taste. It looks like snot but is not as salty. I was reminded of the time I woke up with a bloody nose and the blood had drained down my throat.”
•“Overcooked pasta”

My mom (yes, my mom) that the unique taste of semen proves that God isn’t a woman.  She said that if God were a woman that semen would taste like chocolate.