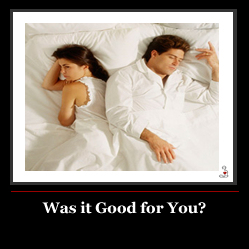 Sex tips for a soon-to-be ex

Its been 3 months we’ve been together and things just aren’t working out that well for me. I was planning to tell you this tomorrow night but since you just cancelled our date to watch the playoffs I thought fuck it, I’m doing it by email. Here’s the deal. You’re generally a decent guy and hopefully you’ll meet the right woman one day. And when you do, I hope that either she’s frigid or you learn to fuck her better than you’ve ever fucked me. Thus, in the interest of your future happiness, I thought I’d pass along some tips. God knows I’ve tried to tell you and show you all of this in a number of ways, but in a way that wouldn’t damage that tender ego of yours. However, the time for diplomacy has ended.

First of all: Fore play. Say it with me now, FOREPLAY. that’s right two syllables. Fore and Play. Breaking it down into its constituent components, what do we get? Fore—which suggests prior, or previous and play, which suggests pleasure. Okay, so, how do we do this “playing before” thing? You seem to like rubbing me, which in and of itself is not a bad thing. But rubbing my head ain’t gonna get me anywhere. Hell, I get that when I get my hair washed and cut and while it feels pretty good, it doesn’t make me want to do the nasty with my lovely (but utterly gay) hairdresser (something for which he is, no doubt, profoundly grateful). Why not start with a little kissing, and no, that doesn’t mean sloppily licking my lips like I’m some kind of damn ice cream cone (hold the licking for later, or, rather, lower). Maybe a trail of soft kisses on the back of my neck and a few nibbles on my ears, huh? I’ve told you like 700 times how much I love that. Then as you slowly return your lips to mine, the tongue can be released from its cage. Not lashing out like some kind of whip, but a sweet, smooth little tease.

Okay, so we’ve got some kissing going. Let’s talk about the next step: Undressing. When you take a girl’s bra off, you need to unsnap it. If you are having trouble, its okay to ask for help. But its not okay to simply shove the thing up. Not only does it practically choke me, but it stretches out the elastic and I personally don’t feel like spending 30 bucks on a bra simply because you can’t figure out a little hook and eye. Plus, its sexy when you undress someone. So do it with grace and pleasure. And don’t just take it all off me at once and leave me lying there naked while you proceed to take your clothes off (and you also don’t need to spend 5 minutes folding your shirt and rolling your socks in a ball while I’m waiting for some lovin’). Intersperse the removal of clothing with some kisses and licks—this is not a strip search after all.

Now, for the breasts. They are not, I repeat, not, dials on a radio. Nipples may get hard when you tweak and twist them, but it is not because of pleasure. No my friend, try some gentle sucking for a change. Oh yeah, and don’t forget to give them equal treatment. For some reason, leftie seems to be the only one getting any action from you. Not that its giving rightie anything to be jealous of, but still……Oh, and when a girl says “Ouch!” it usually doesn’t mean, “please twist my nipples harder.”

Okay, if you’ve been following my suggestions so far, foreplay should be moving into high gear. But this does not mean its time to push her mouth onto your dick. If she wants to do that, she will. Or you can ask nicely..But with you, once the cock is sucked, the game is pretty much over, so you might want to try a few other things first…like: Take mouth off breast, move mouth south to between legs, part legs, find clitoris, lick/suck/nibble until you hear moans of pleasure (do establish its pleasure…again, “ouch” does not mean “oohhh.”) And, if you hear moans, then whatever you do, DON’T STOP until asked.

Now, I’ve been a bit puzzled as to why you seem to consistently skip this all important step between the breast tweaking and hairy meeting sally. Perhaps it Is due to some kind of weird fears? Let me reassure you, women tend to shower daily, they’ll let you know if Aunt Flo is visiting, and there are no teeth (or any other sharp objects) down there.

Okay, so now we should be in pretty good shape. It might be time for some unscripted moves (like she might give you the best damn head you’ve ever had, and if she does its okay to talk to her but telling her to “take it ALL in baby” and then ramming your cock down her throat is NOT going to do anything to the anatomical structure of her throat so you might as well keep quiet).

Alright, for the sake of brevity, let’s say the curtain has risen and its time for the last act. (Note: one way to establish readiness is by touch. If she’s dry as the Sahara desert, I suggest you go back to step 3, or even 2). Assuming all systems go, I want you to use your creativity. While I’m sure she wouldn’t mind if you’re flopped on top of her, all 180 lbs plastered against her undoubtedly sore nipples while you pound away, you might try sitting up for a change, pulling her hips into yours, letting her ride you, flipping her over (spanking optional), fucking her against the bathroom sink? Why don’t you try establishing a rhythm with her consciously slowing when you need to, rather than just “going going gone?” And if she happens to reach down to caress your balls and maybe massage your prostrate, just relax man. She’s not going to penetrate your sacred space (unless of course you ask her to) Oh, and do her the favor of letting her know if you decide that you want to come on her rather than in her. Its not that she’ll mind, but a sudden blast o’sperm in the eyes when one is least expecting it can be rather unsettling.

And finally,until these suggestions have been successfully implemented for at least 6 months, don’t ask whether it was “any good” unless you a) like being lied to or b) have an unbreakable ego.

Well, that’s about it. Good luck with your (sex) life.